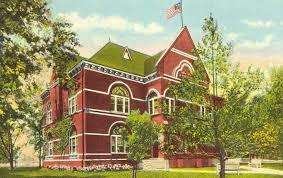 The Cairo Public Library's A. B. Safford Memorial Building is a monument to the love, devotion, and civic-minded foresight of Mrs. Anna Eliza Safford.

​A bronze tablet in the Children's Reading Room honors our first librarian, Mrs. L. L. Powell, who served from the library's inception until her death in 1922.  She was succeeded by Miss Effie A. Lansden, daughter of Cairo attorney and author John M. Lansden.  a fondly remembered, highly honored lady, "Miss Effie's" likeness hangs above a plaque to her memory in the Adult Reference room.  In the hundred plus years of the library's existence, only seven librarians have served. 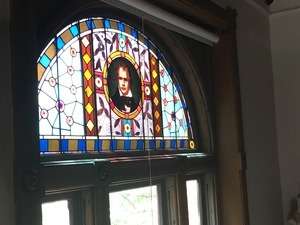 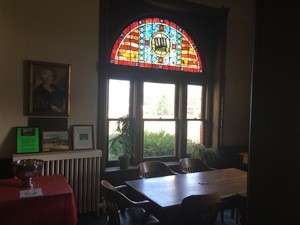 Few changes have been made in the red brick, Queen Anne structure since it was built by Lancaster and Rice Manufacturing Company of St. Louis.  The two niches flanking the main entrance shelter Clio, the Greek Muse of History and Concordia, a roman goddess of Peace.  The bronze fountain, Fighting Boys, is an original work of art by Janet Scudder, one of America's foremost sculptors.  The fountain, a story in itself, was commissioned and presented to the library by Miss Mary E. Halliday.

The first floor of the library consists of a vestibule, hall, the Adult Reading Room, Reference Room, the Powell Children's Reading Room and the stack room, a 1962 addition to the building that houses more than fifty thousand volumes.  A unique drinking fountain in the vestibule is a product of the WPA Arts Project. The wide staircase with ornamental balustrade and wainscoting of walnut, oak and gum, is graduated to form an ornate effect and is typical of Queen Anne architecture.  This combination of woods is used in the decor of the walls and ceilings throughout the building.  The display cases in the entrance hall are the originals that were placed there in 1884. 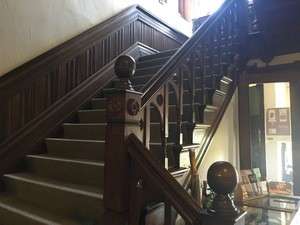 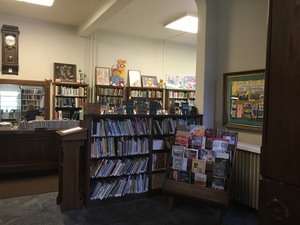 The Adult Reading Room features several interesting pieces.  The periodical shelves were originally in the Woman's Club Reading Room on Ohio Street and pre-date the library itself by a good many years.  A round oak table now used by our patrons first saw service as a gambling table on a steamboat; there's a plugged hole in the top of the table where the dealer raked chips and money into a locked drawer.  Chairs with "US" engraved in the back are from the Cairo Custom House, as are the two Federal Style cabinets and the Italian marble mantel over the fireplace.

In the Adult Reference Room is a replica of the steamboat City of Cairo, carved by river pilot Captain Henry T. Ashton in 1876.  A desk used in the law office of John M. Lansden, who wrote A History of the City of Cairo in 1910, is located in the northeast corner of the room.  The exquisite collection of Cybis Porcelains is in memory of Dr. Emmett J. Gillespie. 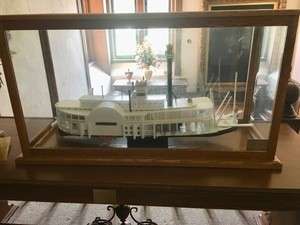 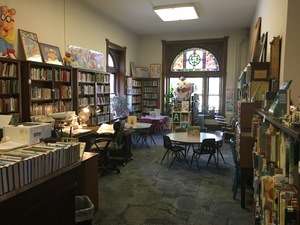 The artwork in the Powell Children's Room is varied.  There's a bronze bust entitled "Small Child"; an 1838 lithograph by LaFosse; several canvases by local artists; and an interesting sampler done at the Loretto Academy in Cairo, circa 1854 by eight year old Mary Scheels.

A rare Tiffany grandfather's clock stands on the first landing to the stairway.  According to Tiffany, only ​three clocks of this type were ever produced; it was presented the library by Berta Smith Eytinge Bonfanti.  The second landing boasts a fourteenth century Italian rosewood credenza, and in the upstairs hallway sits a cylinder desk that once belonged to Mrs. Candee, a sister of Mrs. Safford. 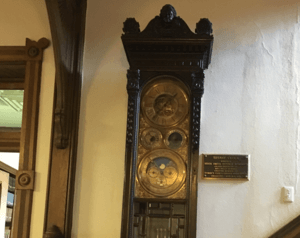 ​On the second floor, a two hundred seat auditorium is used for recitals, receptions, and other events of community interest.  It displays one of the few fixtures not original to the library; a magnificent chandel​ier that once illuminated the Cairo Opera House.  Also in the auditorium is a desk of President Andrew Jackson's that he reportedly kept at the Bank of the United States in Philadelphia.  The desk was acquired and given to the library on permanent loan by ​Staats Taylor, a former mayor of Cairo.  Over the stage hang portraits of Mr. and Mrs. Safford, the latter executed by Cairo artist Mary E. Halliday.  The back wall of the auditorium displays the painting "Nude" by J. H. Fry, made famous in the 1939 New York times Bestseller, "Maud".

​Other paintings of interest in the library include "Home of Maud" and "The Quiet Snow", along with "Winter Home of the Artist" by Virginia Herbert Gibson; "Madonna of the Golfinch" by Raphael and "Madonna and Child" by Carlo Dolci, both copies; "Gloucester harbor" by Wilson H. Irine; the lithograph "Canada Goose" by Rey Bruher; and "Goose Hunting in Alexander County Illinois" by English artist Hugh Monahan. 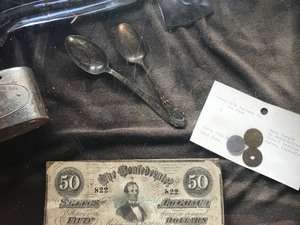 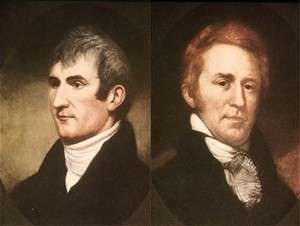 ​Lewis and Clark's expeditionary force reached the mouth of the Ohio River, at its confluence with the Mississippi River, at present-day Cairo, IL on November 14, 1803.  Here the Captains first practiced the use of the navigational instruments they would need to determine latitude and longitude on their westward journey.  Clark sketched a map of the confluence area and began recording travel locations and distances by compass -- establishing a procedure thereafter used on the route to the Pacific.

​​Fort Defiance State Park located near Cairo is only a short drive off Interstate 57.

Newly built cabinetry permanently display replicas of 1775 maps, exhibits and display items used by Lewis and Clark on their trek of 1803.